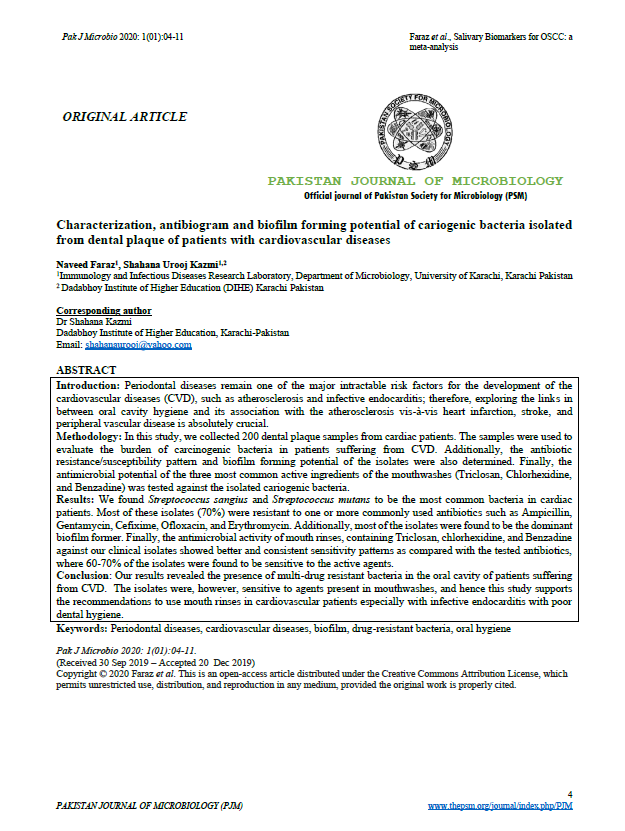 Introduction: Periodontal diseases remain one of the major intractable risk factor for the development of the cardiovascular diseases (CVD), such as atherosclerosis and infective endocarditis; therefore, exploring the links in between oral cavity hygiene and its association with the atherosclerosis vis-à-vis heart infarction, stroke and peripheral vascular disease is absolutely crucial.

Methodology: In this study, we collected 200 dental plaque samples from cardiac patients. The samples were used to evaluate the burden of carcinogenic bacteria in patients suffering from CVD. Additionally, the antibiotic resistance/susceptibility pattern and biofilm forming potential of the isolates were also determined. Finally, the antimicrobial potential of three most common active ingredients of the mouth washes (Triclosan, Chlorhexidine, and Benzadine) was tested against the isolated cariogenic bacteria.

Results: We found Streptococcus sangius and Streptococcus mutans to be the most common bacteria in cardiac patients. Most of these isolates (70%) were resistant to one or more commonly used antibiotic such as Ampicillin, Gentamycin, Cefixime, Ofloxacin, and Erythromycin. Additionally, most of the isolates were found to be dominant biofilm former. Finally, the antimicrobial activity of mouth rinses, containing Triclosan, chlorhexidine, and Benzadine against our clinical isolates showed better and consistent sensitivity patterns as compared with the tested antibiotics, where 60-70% of the isolates were found to be sensitive to the active agents.

Conclusion: Our results revealed the presence of multi-drug resistant bacteria in oral cavity of patients suffering from CVD.  The isolates were, however, sensitive to agents present in mouth washes, and hence this study supports the recommendations to use mouth rinses in cardiovascular patients especially with infective endocarditis with poor dental hygiene.