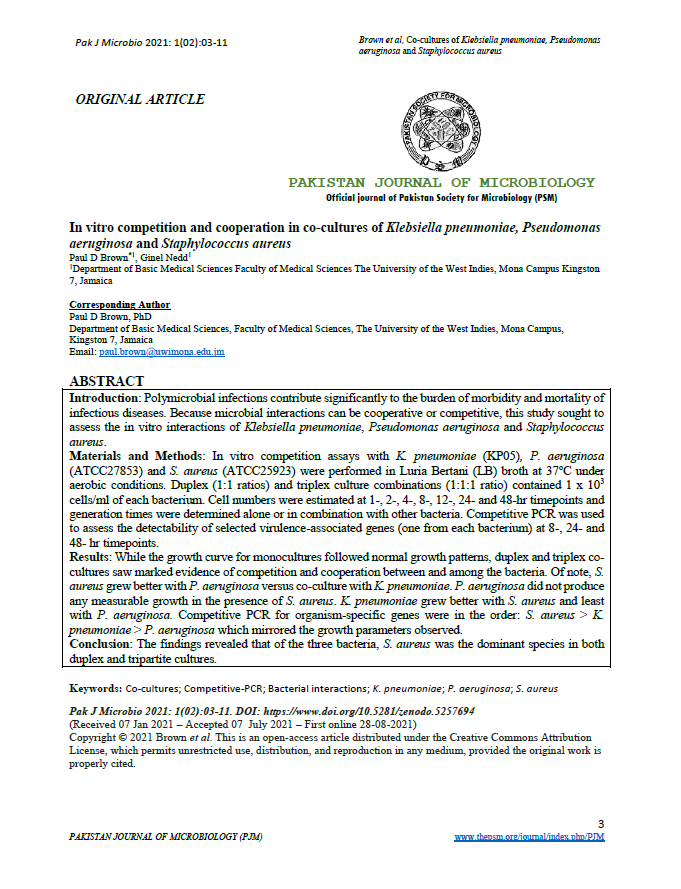 Paul Brown
The University of the West Indies
Ginel Nedd

Introduction: Polymicrobial infections contribute significantly to the burden of morbidity and mortality of infectious diseases. Because microbial interactions can be cooperative or competitive, this study sought to assess the in vitro interactions of Klebsiella pneumoniae, Pseudomonas aeruginosa and Staphylococcus aureus.

Materials and Methods: In vitro competition assays with K. pneumoniae (KP05), P. aeruginosa (ATCC27853) and S. aureus (ATCC25923) were performed in Luria Bertani (LB) broth at 37oC under aerobic conditions. Duplex (1:1 ratios) and triplex culture combinations (1:1:1 ratio) contained 1 x 103 cells/ml of each bacterium. Cell numbers were estimated at 1-, 2-, 4-, 8-, 12-, 24- and 48-hr timepoints and generation times were determined alone or in combination with other bacteria. Competitive PCR was used to assess the detectability of selected virulence-associated genes (one from each bacterium) at 8-, 24- and 48- hr timepoints.

Conclusion: The findings revealed that of the three bacteria, S. aureus was the dominant species in both duplex and tripartite cultures.